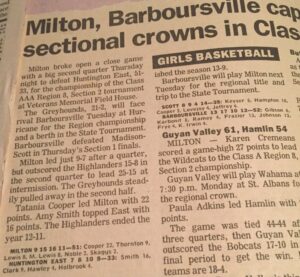 The mighty Milton Greyhounds were on a break after winning sectional and regional crowns in the Class AAA division of West Virginia girls basketball. It also was the week of Thanksgiving. I don’t remember either of those wins but I also doubt I watched this episode of Roseanne. I do remember Jackie saying “you know what your problem is Dan” but I can’t imagine this episode would have been my first complete episode.

Roseanne taps Dan while he is on the phone where he finds out he may win a job and get some new work. He gives her a butt-bump when discussing the call and they get into a slapping hand fight when Roseanne picks on him for laying around each day just waiting for work. He retaliates and puts her in a head lock causing her to scream as if she is a child (sound).

Jackie grabs Dan’s arm to find out what is wrong when he is crying from onion chopping. She hugs his back after he teases her to leave.

DJ puts his hand to Darlene’s to get the exact measurements for a project they are working on
Roseanne straddles Darlene and hug/converses with her. Roseanne uses towel to bump Dan on the head.

Roseanne rubs Dan’s hair and back to console him. Dan dances and Roseanne puts her hand in his pocket. Becky and Jackie grab chairs and they help direct the married couple to sit in them.

Becky has a test for her parents to take and it is called Tantalizing with Touch. Jackie puts her hand on Roseanne’s back as she explains the test is to share an emotion with hands. Roseanne claims she can do it and pat-slaps Dan in the face on the cheeks. He touches her nose. They touch/hold hands in the air, moving their arms.

Roseanne rides DJ into the kitchen as if he is a horse, then lifts him onto the counter with a hug. Roseanne tells Becky she is one of her three favorite kids and tells DJ he isn’t, then goes nose-to-nose with him, pushing each other’s faces around with their noses.

Dan puts his arms on Roseanne’s shoulder to tell her he isn’t going to apologize to Jackie.

Dan grabs a soda from the fridge. He begins work on his 4-star chili (maybe in ’88 they didn’t have 5 stars?) and that dish is prominent throughout the episode. Jackie tastes Dan’s chili and tells him his chili is a little bland. During dinner, she drinks Dan’s soda he saved from earlier.

After the soup is finished, Roseanne feeds DJ some chili on a cracker and gives him the perfect blank stare – with a smile – when he states ‘it’s just a little bit bland.’

Dan grabs a fake cootie from Jackie’s hair and repeatedly makes a squealing sound. Dan yells at Jackie to startle her off the phone because he is waiting for a call and when the phone was being used, no one else could get through. The phone rings and it is a different ringer than the other episodes.

Roseanne slams a pot to startle Dan and Jackie to stop fighting. Rather than continuing to fight with Jackie, Dan slams the door and leaves when Jackie takes a low blow at Dan.

Jackie has already decided she is going to apologize and Roseanne leaves them in the garage to discuss. They begin talking and agree that Roseanne thinks she knows everything and she yells from the yard “Well I do.”

Dan makes cartoon noise when the sisters push him off the couch.