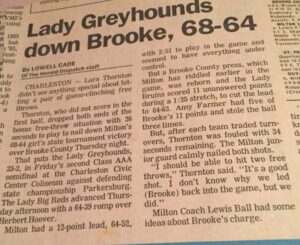 The mighty Milton Greyhounds were two days away from playing Brooke in the 1988 West Virginia girls basketball State Tournament. I sort of remember the game, but only because a reporter talked to me after, and I don’t remember this episode.

Dan pats DJ on the head when telling him to stop playing on the kitchen table/blueprints. Roseanne puts her arms on Dan’s back and gives him a little shove to convince him to enter a country music song writing contest. Roseanne puts her hand on Becky’s back to turn her around in order to fix her and Darlene’s fight (to fight to the death). Dan holds on to Roseanne when she tells him he is the boss – so he doesn’t fall down. Dan and Roseanne pinky shake that the kids won’t come with them when they go on tour from winning the contest.

Dan rubs Roseanne’s back when talking to her about the contest. Dan pats DJ on the head when he tells his sisters to shut up. Becky tries to sit in the same chair as Darlene, causing a minor scuffle, but DJ tells them again to shut up.  Roseanne holds Becky’s hand when trying to be patient waiting for the winner to be announced. They all hold each other when waiting for the results.

Dan rubs down DJ’s head when telling him he didn’t win the contest. He gets a glass of water from the sink, puts his arm around Roseanne and hugs her; they hold each other.

Roseanne makes dinner which includes rice, the brand – Uncle Heyguy.  At work, Jackie buys candy from the vending machine. Booker has an apple at the table. Everyone comes in to eat and drink on break. Cookies, coffee, apple, crackers/meat from a can are all meals people have in the break room. Dan is in garage looking for music and Roseanne brings him a cup of tea.

When preparing to hear the contest results, Roseanne puts popcorn in a bowl (from a pot on the stove) and tells Dan she popped him some corn.

Becky and Darlene fight verbally, loud, come downstairs fighting/pushing-pulling pillow, wrestling. This episode relies heavily on sound as Dan has a “trunk full of songs out in the garage.” The “break bell” sounds at work and all the workers spill into the break room.

In the garage, Roseanne sings a song from sheet music. Dan sings as well. Dan plays the guitar and sings. The live audience cheers and screams when Dan finishes singing.

Jackie “yee-haws” when Roseanne says they will move to Nashville after winning.

Crystal screams, jumps from a cockroach on the table. The girls at work scream and yell harassing Booker when he bends over to pick up a pencil.

The family screams and yells when thinking they had a chance at winning the contest.

Dan sings to the kids so they could hear the song. They dance and push each other, sway and DJ tries to sing along. Loud screaming from the live audience is heard.